Taking a Look at The Laughing Cavalier by Frans Hals

With galleries starting to open in London, it will be interesting to see what will become the new normal. Although personally I won't be visiting any just yet, it's great to read so much positive feedback on those who are. Although numbers are obviously capped, it doesn't seem that everybody else is flooding back yet either, and I wonder how August will look in regards of tourists? Be it from abroad or from the rest of the UK.

The Wallace Collection recently re-opened its doors on the 15th of July, and like most other venues you'll need to book ahead.

One of the highlights in the collection is The Laughing Cavalier by Frans Hals. This is one of those paintings which I remember being vaguely interested in when I first saw it, I wasn't into art back then, but this had some kind of impact on me. Maybe it's because it's so lifelike, so alive and has managed to captured such a specific man and personality. I think what adds to the fascination is the fact that nobody knows for sure who it is, so it's down to us the viewer to make our own conclusion. Although it's always nice to be told what we are looking at, it makes a nice change to make some of our own decisions - to be able to paint our own picture of who this man might be.

Painted in 1642, it actually got its name The Laughing Cavalier from the Victorians, when it first went on display at the Bethnal Green Museum in the 1870s. But looking closer, he's not in fact laughing, ok there's a bit of a smirk there, but it's very much amplified by his extremely upturned (and impressive) moustache.

But nevertheless, what a beautiful painting. The clothes of this gentleman are absolutely spectacular, even more so because he's set against an incredibly plain, almost unfinished murky looking grey background. From the exquisite broidery to the intricate lace around his neck and the bottom of his sleeve.

On face value, it certainly is a sight to behold. But the more you look at it, the more you notice some rather odd and disjointed bits. I've mentioned the almost unfinished quality of the background, but there's a few other areas which you can't help but question when you take a closer look... 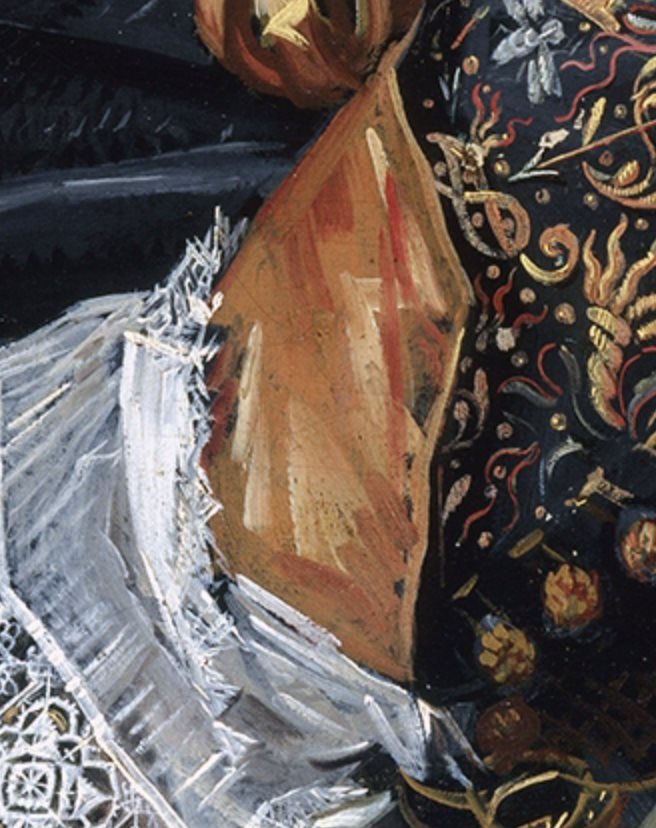 From going into such detail in the lace, take a look to the area just above in the orangey-gold-brown colours. It appears to be very roughly done, almost blur of colour, but isn't it fascinating that at first glance you don't even acknowledge it? It seems to just fades away if you look at the piece as a whole. The same is seen on the black fabric which wraps around his body - looking at the area on its own, we see that there's barely any detail here and the artists hasn't really focused on this part to create the idea form and a sense of three dimension. And now take a look at his hat, there's so little shading here, in fact it's really just a shape on top of his head - there's no sense of realism or depth. But we as the viewer automatically came to the conclusion of the style of the hat and how it sits upon his head tilting back.

Yet isn't that just incredible? That the artist can produce such a brilliant work and that we kind of ignore those areas? Some parts appear to be so briefly done and undeveloped, but our eyes are meant to do the rest of the work. I just love this involvement we are meant to have with this picture. We take an active role in the finished overall composition.

Back to the man in the painting, we don't know for certain who he is, but there's no doubt he's an important and wealthy man. It's been suggested he was a military man or just an upper class citizen, dressed up in all his finery for this portrait.

The luxurious costume is brimming with detail. Looking closer at the incredible intricacies on his silk sleeve we can also see a number of emblems - arrows, lovers knots, bees, flames - all symbols of love and desire, and the pain which often comes with it. Perhaps this was a portrait to show the availability of the man, or perhaps a marriage portrait.

It's been suggested that it depicts the wealthy cloth merchant Tieleman Roosterman, and the dates certainly add up. The Latin text on the top right corner tell us that the sitter was 26 in the year 1624, which work out for Roosterman. I certainly see some similarities, perhaps the Laughing Cavalier was to celebrate him coming into wealth, a way to memorise his acquired wealth, or it could well be to celebrate a recent successful marriage proposal.

In both these pictures, we can certainly gage a certain personality of the man depicted, there's something so real, so natural that Hals can portray in his portraits. And there's even more of his work to discover in London to give us a sense of his ability and talent.

Isn't this just such a delightful painting? Most other family portraits show everyone looking towards the viewer, doing what they're told to give the impression of a perfect family but this is just so much more than that. I love the little girl trying to get her mothers attention, and the fact that there's only one person actually looking towards us and paying attention!

Again the artists has brought this couple to life, gone has the rigid formality often see, these two actually look like they enjoy each others company! I love how the gentleman leans back, he's so relaxed in the company of his wife and also the artist, and the little cheeky smile of the young woman.

The Banquet of the Officers of the St George Militia Company in 1627 - Frans Hals, Frans Has Museum (pubic domain)
Willem Heythuijsen by Frans Hals - Public domain

And finally this overly personal, super casual depiction of Willem Heythuijsen. Just look how relaxed and comfortable this man is in Frans Hals company - not because he thinks he's above the artist, but I think there's something about this painting which shows a mutual respect between the artist and sitter as he leans back on his seat. And take a look at those gorgeous tassels on the seat, I want to run my fingers along it, it's incredibly realistic. And that spur on the back on his shoe! They way he bends his cane and his facial expression gives me the impression that he went to sit for Hals, he had a little bit too much to drink telling the artist about how stressful the last few weeks have been, and this is the outcome. Do you think the story ended with him getting the best of someone? The tension of his cane certainly gives me that impression.

This painting sold at Sothebys in 2008 to a private buyer. Shame that we can't all enjoy it, but I do hope the owner gets as much joy as I get out of it form just looking at it on my screen!

Have you got on throughout Lockdown without visiting galleries? Have you been to any already? I would love to know how you got on if so.

If you enjoy reading my blog posts why not subscribe! You'll find the form to enter your email address on the home page here.